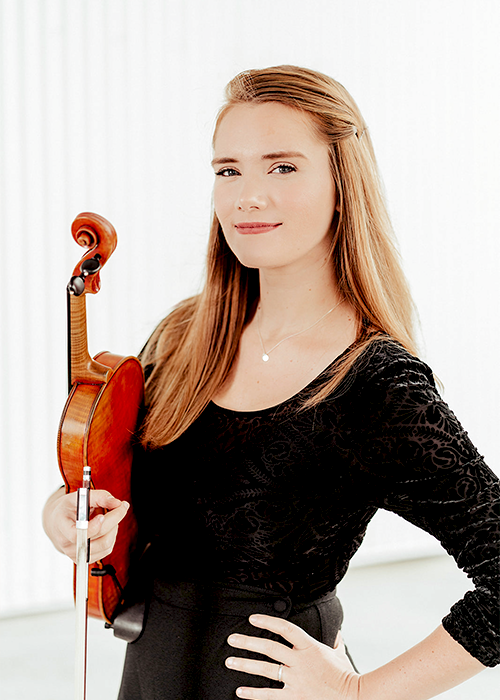 Originally from Windsor, Ontario, Kathryn is an active & versatile freelance violinist and educator on Vancouver Island. Her passionate and intuitive musicianship has brought her the opportunity to perform with distinguished ensembles around Canada and the USA. Currently, she performs with the Victoria Symphony, Music for The Pause, Victoria Baroque Players, Pacific Baroque Orchestra, and Sidney Classical Orchestra.

She was born into a musical family, with both parents educators and string performers, and has many fond early childhood memories of tagging along to with her father, professional cellist and conductor, at his Windsor Symphony rehearsals. She studied at the University of Toronto and University of Michigan under the tutelage of the late Yehonatan Berick as a merit scholar. Over the years, she has brought her talent various music festivals, including the Vancouver Bach Festival, Berwick Academy at the Oregon Bach Festival, Brott Music Festival, Tafelmusik Baroque Summer Institute, Domaine Forget, National Youth Orchestra of Canada, and Interlochen Centre for the Arts.

As a busy entrepreneur, Kathryn is the owner, artistic director, and avid arranger of Cascadia Strings, a highly sought-after, award-winning professional event music company, as well as a concert chamber ensemble, providing live music from Victoria to Whistler and everywhere in between. Kathryn can also be heard on the album, “La riche canadienne: The Music of Elinor Dunsmuir”, an exciting project which premieres a collection of post-romantic, recently-unearthed chamber works by the fascinating Canadian composer.