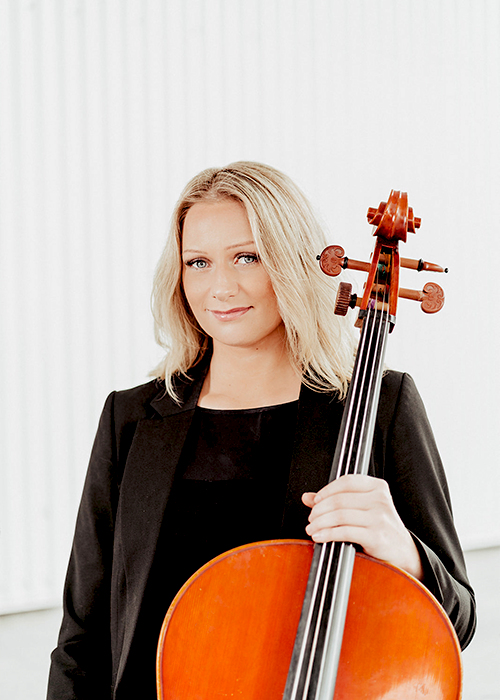 Originally from Burns Lake, BC, Erin is a freelance cellist, session musician and cello teacher, now settled in beautiful Victoria, BC. As a young artist, she performed her solo set at the “Listen Up” Festival in Vancouver and was selected to record her compositions at CBC Radio 2. Receiving multiple fine arts scholarships including an entrance scholarship to Capilano University, she completed her studies at the University of Victoria earning her Bachelors of Music degree in 2010 and Masters of Cello Performance in 2012 under the mentorship of Pamela Highbaugh-Aloni.

Erin is a founding member of the two-time award winning “Cascadia Strings”, as well as writing/recording/performing in her band “Auburn Blind.” As a cellist she has played with the Prince George Symphony, the former Galiano Chamber Orchestra, Sooke Philharmonic and the Civic Orchestra. Erin has had lots of fun recording in music studios all over Vancouver Island with groups such as Current Swell, Fox Glove and Noah Edwards. Session recording has also been an exciting new venture for Erin, recording cello for documentaries The Wild (2018), Walking With Plants (2019) and soon to be released indigenous documentary to be featured on Chek News, Tzouhalem (2021) She has also done session work for Cloudrise Pictures including the animation mini series: Esluna: The First Monolith (2019) and Esluna: The Crown of Babylon (to be released in 2021).