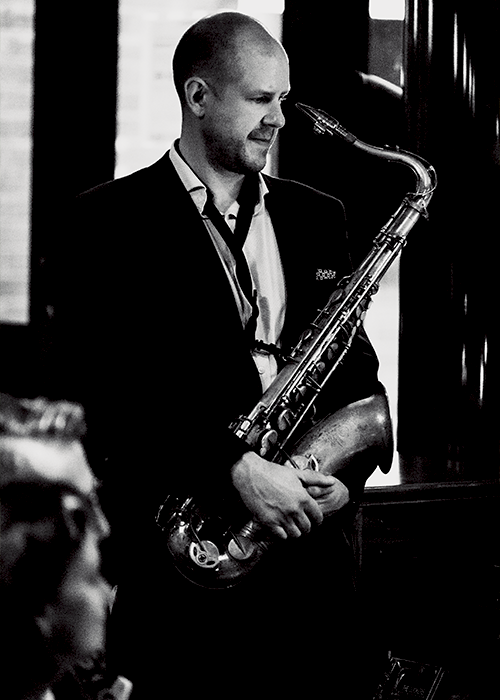 Saxophonist Ryan Oliver steeped his concept and artistry in the creative fires of Amsterdam, honed his craft in Toronto and realized his dream of joining thousands of saxophonists at crowded jam sessions for several years in the jazz metropolis of New York City before returning to British Columbia and the natural beauty of Vancouver Island. His saxophone tone and
musical world reflect the uniqueness of these scenes and his musical journey. For over 15 years, Oliver toured the world with legendary Canadian jazz group the Shuffle Demons who often found themselves in inspiring and crazy situations from crowded subway cars at the Old Dheli market in India to isolated Dixieland festivals in the Australian outback. Oliver has been nominated for a Juno award for his work on Derek Miller meets Double Trouble (featuring Willie Nelson) and was also nominated for the Prix De Jazz at the Montreal Jazz Festival. He did not win either award but has continued to perform anyways. (It was an honor just to be nominated).
As a leader he has released several CDs including Strive featuring jazz legend Victor Lewis and Convergence which was selected by CODA magazine as one of the top jazz releases of 2012. His most recent release for Cellar Music , Ryan Oliver with Strings features music for jazz quartet accompanied by 12 strings. Oliver holds a Masters Degree in Music from Rutgers University and has been a featured clinician and educator at Universities and schools throughout the world.